On March 20, 2020, the world lost a special superhero. Samuel Harrison Fiveash–aka “Hulk,” of Park City, Utah, passed away suddenly of a seizure-induced cardiac arrest. Never reigning in his personality, Sam lived a bold life of adventure experiencing more in his seventeen years than many do in a full lifetime.

He was born April 5, 2002, in Truckee, California, to Bill and Hillary Fiveash and spent his early years making life-long friends in Reno, boating on Lake Tahoe, and learning to ski at Northstar. In third grade he moved to Park City attending McPolin Elementary and continuing through PCSD with the invaluable aid of many special educators and peer tutors. Sam was a senior at Park City High School.

He was both spicy and sweet. Sam’s chromosomal anomaly, accompanied with some challenging behaviors, demanded those around him to be their best selves. It was not uncommon for Sam to greet others with a death stare or the middle finger. If you were lucky to know him, he granted you a generous smile, and you felt your self worth skyrocket. 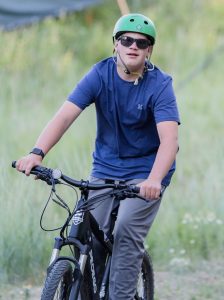 For much of Sam’s life he subscribed to the Marvel Universe, at one time going by the alias of Ironman, then Iron Patriot, and finally landing on Hulk. Similar to his nickname, Sam could be misunderstood, and he had the potential to “turn green.” But, also similar to his namesake, he possessed incredible strength and power that he truly understood came with great responsibility. We saw his truest strength and power when it came to Sam’s incredible heart. Sam never missed a beat when it came to helping others. For the past two years, Sam worked at the PCSD preschool where he flourished reading books to the kids, helping them with their ski equipment, and acting as traffic cop to ensure they crossed the street safely. In addition, Sam helped in the school kitchen opening boxes and filling fruit cups–he was extremely proud of his food handling license. On Thursdays, he could be found volunteering in the pantry at the Christian Center. 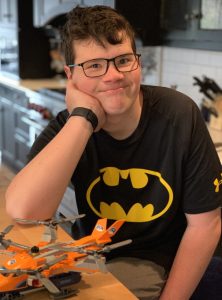 Sam’s passions included a true appreciation for vehicles. Over the last seven months he logged 1,994 miles on his electric bike simply cruising around town. You may have seen him out in the community at Lucky Ones or at City Park. Sam was an accomplished driver and learned how to drive stick shift in a 1987 Jeep Wrangler with his brother just days before he passed. Both a builder and a dismantler, his bedroom was a Lego hoarder’s paradise. Sam first learned to play UNO as a way to increase his sociability, and he went on to become a savage competitor.

He created nicknames for people and things he loved, felt like there was almost never a wrong time to wear shades, envisioned himself 2” taller than he was, and proclaimed his phone case was in-de-struct-able. He loved doing big adventures with his older brother, “Bubba,” climbing to the top of the old mining tram towers, hammocking, camping, and cliff jumping. And, he loved socializing with friends from school and Young Life Capernaum.

Sam had a standing date with his dad every Saturday night at the Kamas pool followed by dinner and his self-created Nutella shake at Hi-Mountain where he was considered a regular and dubbed #favoritecustomer.

He spent his summers in Canada at Camp Kennebec–the highlight of his year–where he wore his signature goggles/life jacket/flippers look and rarely left the waterfront. Sam showed tremendous growth socially and emotionally each summer and earned the title “Big Brother” because he had a natural ability to help those with needs greater than his: whether it be covering someone’s ears when the dining hall was too loud, holding their hand helping them back to the cabin, reading a book to them during rest hour, or sharing his iPad during cabin times. He was a friend to all, but especially to those who needed a friend the most.

Sam thrived in water and always envisioned himself in a warmer climate, but he recently returned to skiing. He found much joy participating on Team Flyers with the National Ability Center where he found great friendship and earned a gold medal in the adaptive division of USASA rail jam.

Sam taught us many life lessons: Take time to relax. Don’t rush. Always help others. Check in on people whom you care about. Be your authentic self: don’t worry what others think. Be direct in your communication. Listen to music–it’s okay to loop the same song if you really like it. Appreciate your pudgy tummy. Wherever you go, seek out the most fun transportation.

We will miss Sam’s spirit the most: his infectious smile, his spicy yet quick-witted comments, and his ability to make us laugh.

Sam is survived by his parents, his big brother Charlie, his grandparents, and his many aunts, uncles, and cousins. He is preceded in death by his Grandpa Mount and his friends Bridge and Max.

The Sam “Hulk” Memorial Fund has been established as a tribute to his inherent super power to support kids who need it most. His family will create a Hulk Hangout Memorial along his bike route.