Park City Climate Fund grant helps move recipients in the right direction. “Community has propelled us into what we have become.”

Mitch Dumke, co-founder of 3 Springs Land & Livestock, became a vegetarian to play his part in helping curb the climate crisis. An avid environmental advocate, he wanted to ensure he was doing all he could as an individual to reduce his contributions to the climate crisis. Until a conversation with his childhood best friend, James Gilson, changed all that.

Gilson showed him a Ted Talk by Allan Savory, where Savory discussed the power behind regenerative agriculture, the reversal of desertification – what Savory calls a fancy word for when land is turning to desert. A large culprit of desertification is the grazing of livestock…or so we thought.

At the time, Dumke thought climate damage mainly stemmed from a carbon emissions problem. He didn’t realize the issue is much more profound, given the narrative that he had been told for most of his life. “Human beings are outputting mass amounts of pollution, but they are also reducing the planet’s capacity to handle such extreme changes in its chemistry,” says Dumke.

Dumke compared the phenomena to tying one arm behind the Earth’s back, while also stuffing a cigarette in its mouth. When it comes to handling global climate change, humans are not setting the Earth up with the tools necessary to bounce back. Rather, they are actively debilitating it as they go. Regenerative agriculture is just one solution that gives the Earth back the power to heal itself.

“Regenerative agriculture sees the soil as a partner and not just a resource to be used and exhausted,” explained Dumke. “It helps us have a little less control and a little more trust in natural systems, to trust the Earth to be able to know how to recover.”

3 Springs Land & Livestock was born out of the idea that soil health is wealth. Consumption of meat can happen responsibly through regenerative agriculture, which is a practice that does more to preserve and restore damaged grasslands than leaving the land alone entirely. That’s because soil acts as a carbon sink – a naturally occurring environment that absorbs carbon dioxide from the atmosphere. So not only does regenerative agriculture have ecological benefits, such as improved soil health, soil fertility, and biodiversity, but it also has the ability to sequester carbon from the atmosphere, which can help reverse the impact of climate change, and build resiliency to extreme weather patterns such as flooding, drought, and wildfires.

“It’s crazy to think that two years ago, I had a certain perspective on agriculture, and on meat specifically; that I completely disconnected millennia of large animals and omnivore humans and how that couldn’t continue to coexist in the modern-day,” he added. “The agricultural industry has gone so far down a path of trusting a salesperson about a chemical that will increase production of plants, that  we have forgotten the land can do that same miraculous thing if we just trust it and work with it.”

Pre-covid, Dumke had been working at a tech company where he felt unfulfilled by his work. He wanted to believe in regenerative agriculture, so he wanted to try it. Dumke and Gilson recruited Gilson’s realtor, McKinley Smoot, a Summit County native raised on a cattle ranch at the foot of the Uinta Mountains. Smoot was already dedicating his time and money to educating his community on the practices of regenerative agriculture and had a deep-rooted passion for soil science, a vital addition to the team. 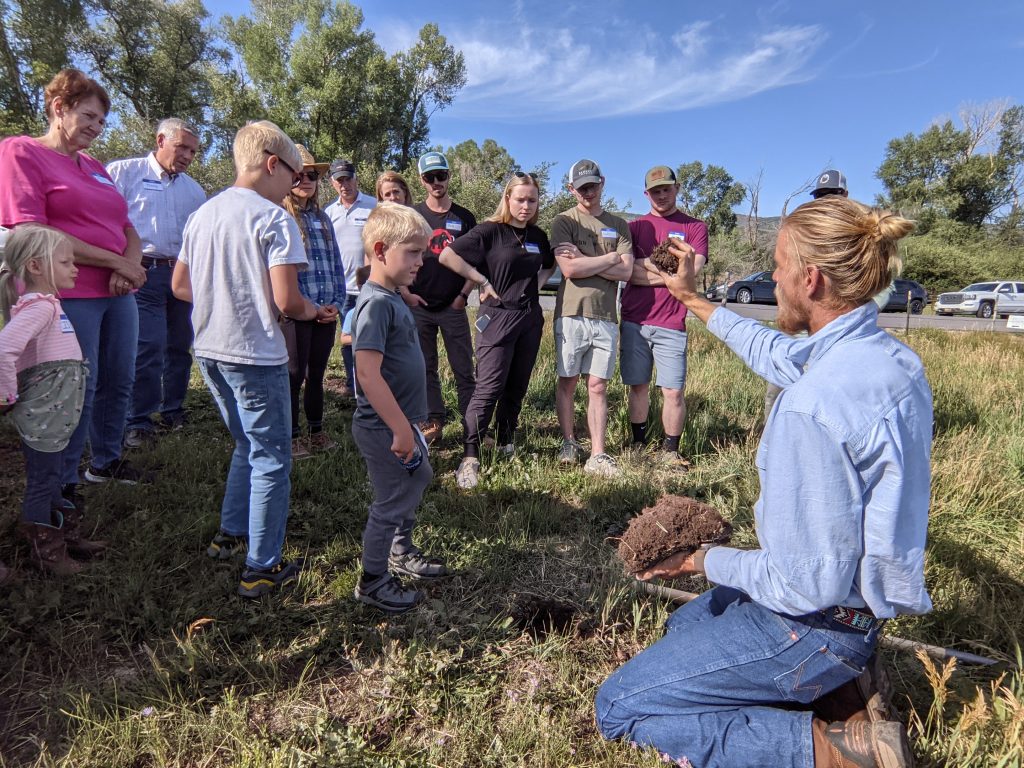 In November of 2021, the trio rented a ranch for sale next to Marchant Meadows, a plot of agricultural land under contract to be purchased by Summit Land Conservancy. From there, the community connections steamrolled. Summit Land Conservancy introduced 3 Springs to Recycle Utah, who then invited them to share their story at one of their popular Green Drinks events.

At the time, 3 Springs was just a concept, a theory being formed into a reality. But the excitement of the community and the support of their idea drove them to think bigger, and more aggressively, about what the ranch could do for the community, and for the state of Utah.

Luke Carton and Celia Peterson, who work at the Park City Municipal Sustainability office, were inspired by their idea and suggested 3 Springs apply for a Park City Climate Fund grant from Park City Community Foundation to really help get the ball rolling. Dumke says this experience pushed the team to dig even deeper into their potential and formulate a game plan that demonstrated tangible impact on the land of Summit County.

Now, in the spring of 2022, 3 Springs are putting their Park City Climate Fund grant pitch into practice, having successfully secured a grant in the fall of 2021. They are also in the process of doubling their cattle herd. They acquired 150 chickens last year, and are now up to 300. The team hosts field days for folks to come out to the ranch and see what they are doing in real-time, and they are working on pooling together independent resources through partnerships with agencies such as the USDA’s Natural Resources Conservation Service (NRCS) and the Kamas Valley Conservation District, to create educational material for schools and ranches in Summit County.  Maddy, a Park City High School graduate, who was inspired by their visit to her school, reached out to the team and offered her services as an intern while attending Cornell University out east.

And they haven’t even had the ranch for a year.

Some day, the team would like to acquire more land, grow their livestock numbers, and eventually, create a summer range and a winter range to help support regenerative ranches in southern Utah. But overall, the goal is to utilize partnership among community players to offer opportunities for soil education and eventually influence other ranchers and farmers to join them on their mission to restore and protect the health of the soil. 3 Springs aims to show the community what the soil can do, rather than simply telling them what it can do.

“At the end of the day, the ecological, historical, social, and cultural contexts of our community, are just as important as the vision,” said Dumke. “Community has propelled us into what we have become.”

Posted in: Climate Fund, Our Impact